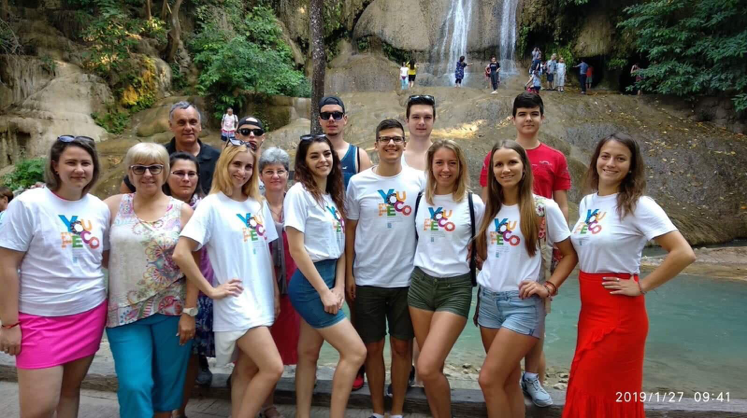 The Thailand International Folklore Festival (TIFF) took place between the 15th and the 31st January 2019). World Leisure Youth Ambassadors Committee (WLYA) was represented by a group of 34 young musicians (from USA, China, Hungary, South Korea, and Slovakia), members of YOUPECO (Young People’s Concert).This participation followed the invitation to YOUPECO during the Citizens Festival in Hangzhou, and the group was coordinated by Dr. Miklos Banhidi, chair of the WLYA.

The festival was organized by three parties, Phechabun Rhajabat University, governmental and civil organizations, under the leadership of Dr. Achara Phanurat, who was president of the Surin University. The aim of the festival was to invite international performing groups to Thailand to perform for peace all over the country. Groups from 17 countries and almost 270 performers presented several shows traveling to different locations, mostly in Sisaket, Surin and Kanchanaburi districts.

Performers were enthusiastically welcome at all locations. In some places, local people even shared their house for accommodation. All delegations were transported by bus from one location to the other, which helped keep so many participants together. In the evenings all delegations performed on well prepared stages. Among many high-level groups YOUPECO presented excellent performances such us rap music, hip-hop, folklore dances and traditional tai-chi. A Peace Declaration was signed by participants, including representatives of YOUPECO and WLYA. The participant groups also signed Memorandums of Understanding (MoU) with the district representatives to show commitment for future cooperation.

Furthermore, YOUPECO group had the opportunity to visit several touristic, unique places. One of the most interesting places and stages for the group was the historical site of the Bridge on the River Kwai, which is a tribute to the approximately 15,000 prisoners of war (POWs) who lost their lives building the “Death Railway” during WWII. On the 28th of January all the delegations marched across the bridge as a symbol of memory and solidarity. On the other side of the bridge the Peace Declaration was handed over to the former president of Thailand.

The atmosphere of the festival was excellent, providing good opportunities to make friends and develop connections with TIFF organizers. Thus, WLYA Committee has an opportunity to keep on cooperating with the TIFF, an international leisure event that is contributing to international cultural cooperation, from which everyone can learn. The organizers have announced that the festival will be organized again next year and the folklore groups have been invited to participate. The TIFF can become an excellent platform for young talents around the world.